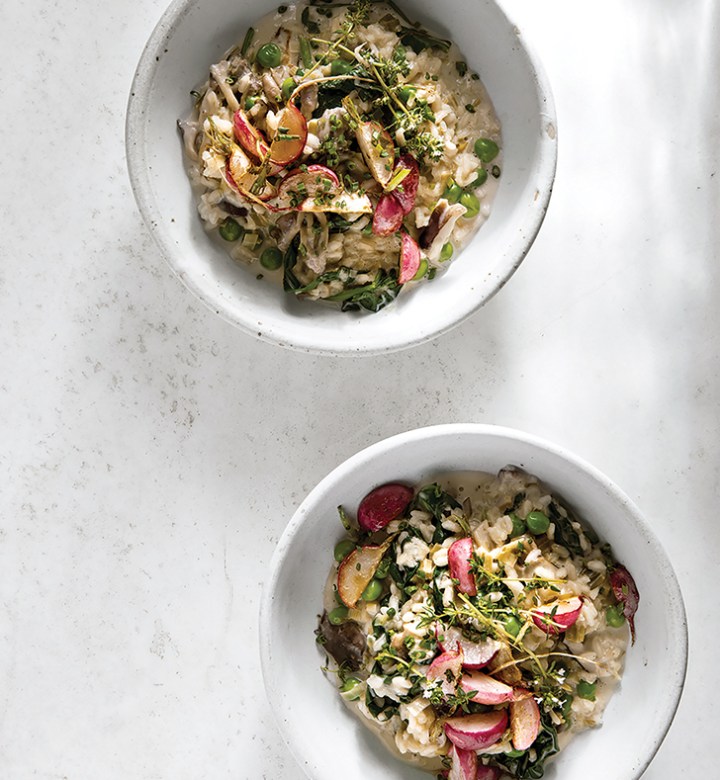 Risotto might require a fair amount of stirring, but when all you have is time, why not use it to make one of the most comforting dinners in the book? Joanna Gaines’s recipe for spring vegetable risotto (from her new cookbook, Magnolia Table, Volume 2) takes advantage of all the gorgeous in-season produce we’ve been waiting for since last winter.

This version calls for radishes, peas and spinach, but feel free to use the vegetables you have on hand. It’ll still taste delicious, thanks to all that butter, white wine and Parm. Risotto is flexible like that.

16 ounces assorted mushrooms, such as button, shiitake or portobello, sliced

1. In a medium saucepan, bring the chicken broth to a simmer over medium-high heat. Reduce the heat to low and set aside to keep warm.

2. In a large soup pot or Dutch oven, melt 3 tablespoons of the butter over medium-high heat. Add the leek and mushrooms and season with the salt and pepper. Sauté, stirring occasionally, until the mushrooms are golden brown and the leeks are soft, 8 to 10 minutes. Add the garlic and stir until softened and fragrant, about 1 minute.

3. Add the rice and stir constantly until it begins to turn translucent and develops a nutty scent, about 3 minutes. Add the wine and stir until the rice has soaked up all the liquid and any browned bits on the bottom of the pan have been released. Reduce the heat to medium. Carefully ladle 1 cup of the warm chicken broth into the rice mixture, stirring constantly until the rice soaks up all the liquid. Repeat by adding 1 cup of broth at a time and stirring until absorbed. The risotto will thicken as the starch is released.

4. Meanwhile, in a small skillet, melt 3 tablespoons of the butter over medium heat and add the radishes. Cook, stirring occasionally, until the edges are golden brown, about 5 minutes. Remove from the heat.

5. When all the liquid has been absorbed into the rice mixture and it is creamy and thick, add the Parmesan, cream, ½ tablespoon of the lemon zest, the lemon juice, peas and spinach. Stir to combine until the spinach is wilted. Add the thyme, 1 tablespoon of the chives, the radishes and the remaining 2 tablespoons butter, stirring until the butter is melted and absorbed.

6. Garnish with the remaining 1 tablespoon chives and ½ tablespoon lemon zest. Serve warm as a main dish or as a side. Store in an airtight container in the refrigerator for up to 1 day. Reheat in the microwave.

Note: The information shown is Edamam's estimate based on available ingredients and preparation. It should not be considered a substitute for a professional nutritionist's advice.

Made it? Rate it!

Fall Charcuterie Board with Black Pepper–Honey Brie, Figs and Rosemary