PureWow editors select every item that appears on this page, and the company may earn compensation through affiliate links within the story. You can learn more about that process here. 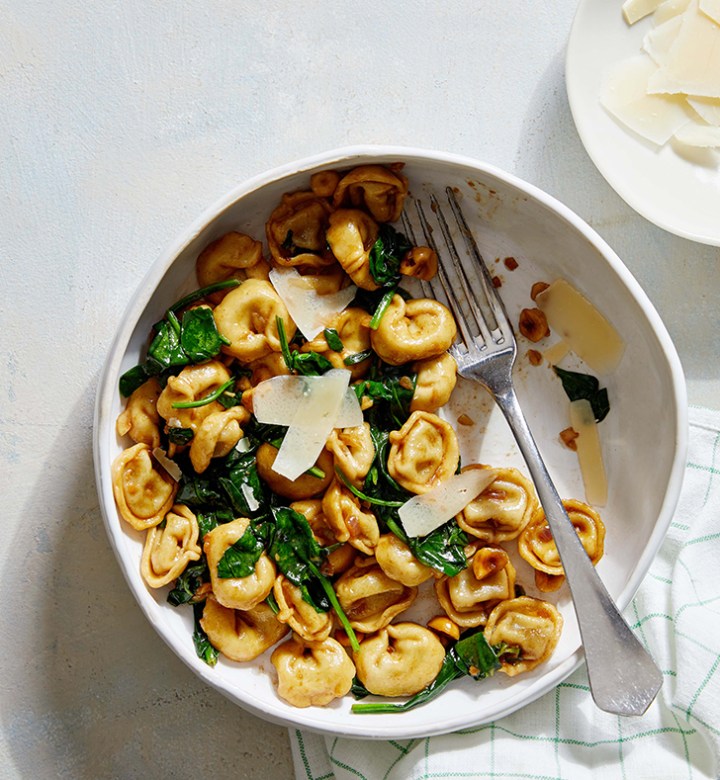 Are you familiar with the magic of store-bought cheese tortellini? It takes almost zero effort to dress up and tastes like you spent all day making it. But instead of pairing the pasta with jarred marinara, try this balsamic brown butter tortellini with spinach and hazelnuts, from Sheela Prakash’s new cookbook, Mediterranean Every Day.

“Cooking something that feels fancy doesn’t necessarily mean toiling for hours in the kitchen,” Prakash writes. “If you don’t believe me, take this recipe as proof. Fresh or frozen cheese tortellini is ubiquitous in grocery stores and more than fine when tossed with marinara sauce for a quick meal. But, in just as little time, it can become a dinner that deserves an impromptu bottle of wine after a harried Wednesday.”

“The secret is a super-easy-to-make brown butter sauce,” she continues, “which makes pretty much anyone weak in the knees. The situation would be well and good if left at that but to make it feel extra special, a surprise ingredient doesn’t hurt. In this case, it’s hazelnuts. They amp up the toasted flavor of the brown butter and add just enough crunch to keep each bite interesting.”

Say no more. We’re all in on this dish.

Reprinted with permission from Mediterranean Every Day: Simple, Inspired Recipes for Feel-Good Food, Copyright © 2020 by Sheela Prakash. Published by The Harvard Common Press, an Imprint of The Quarto Group.

1. Bring a large pot of salted water to a boil over high heat.

2. Meanwhile, cut the butter into a few pieces and place it in a large, high-sided skillet over medium heat to melt. Cook, stirring occasionally, until the butter is pale golden, about 3 minutes. Add the hazelnuts and cook, stirring occasionally, until the nuts are glossy and golden and the butter is just beginning to turn toasted brown and have a nutty aroma, about 3 minutes. Add the shallot and sauté until softened, about 1 minute more. Remove from the heat and carefully stir in 3 tablespoons (45mL) of the vinegar, ¼ teaspoon of salt and several grinds of black pepper.

3. Add the tortellini to the boiling water and cook for 1 minute less than the package instructions for al dente.

5. Remove from the heat and stir in the remaining 1 tablespoon (15mL) of vinegar. Taste and season with additional salt and pepper, as needed. Serve garnished with shaved Parmesan.

Note: Though there’s hardly anything wrong with butter as-is, allowing it to transform into something so fragrant and nutty that it’s arguably richer than its original state is pure kitchen magic. The technique is fairly easy to master but it does require a close eye, as burned butter isn’t quite as enchanting.

When possible, reach for a light-colored pan so you can easily see the butter browning and know when it’s done. Start with unsalted butter (it can be cold, straight from the fridge), in any amount, but if it’s more than a couple of tablespoons, cut it into equal-size pieces to ensure even melting and browning. Place the butter in the pan and turn the heat to medium. Let the butter melt, stirring occasionally, until it begins to foam. Continue cooking and stirring occasionally. The foam will subside, the color will start to change and lightly browned specks will begin to form at the bottom of the pan. The overall color of the butter will transform from yellow to golden tan to deep toasted brown and the butter will have a nutty, caramelized aroma. Once it reaches this stage, immediately remove it from the heat to prevent it from browning any further and burning.

Note: The information shown is Edamam's estimate based on available ingredients and preparation. It should not be considered a substitute for a professional nutritionist's advice.

Made it? Rate it!

Fall Charcuterie Board with Black Pepper–Honey Brie, Figs and Rosemary